I was rather thrilled to see these two 7542s offered by the Chinese teashop - after all, one does not meet such teas everyday (I do not, at least). What I thought to be an interesting comparison turned out to a duel of storages - I'm afraid that the teas are so diffent that I could never distinguish it was the same blend. There is, of course,  the possibility of fake tea, but using Occam's razor, the difference here may be explained by differrent storage well enough. 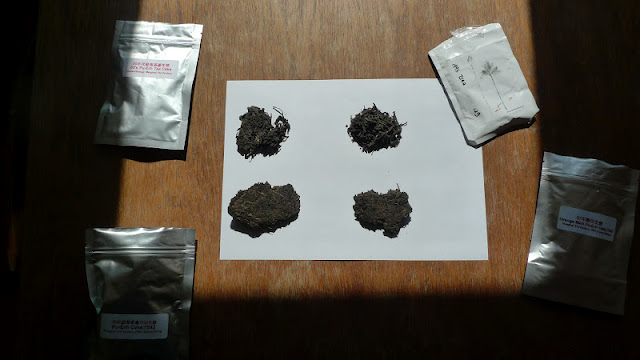 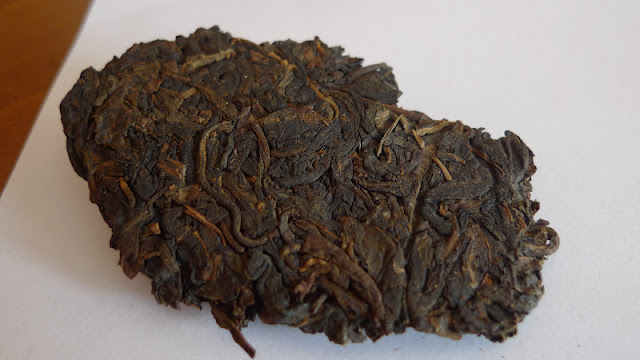 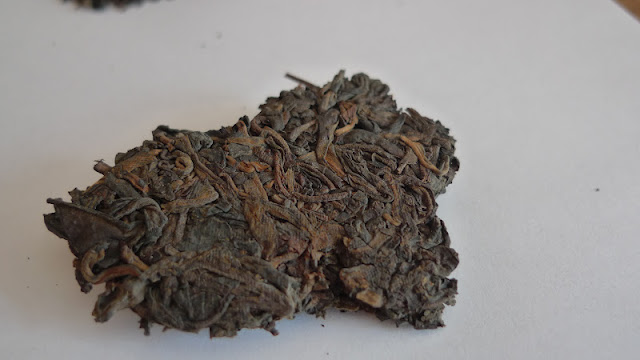 Does the 1997 look more aged? It does and it actually is. The 1996 purportedly comes from taiwanese storage, the 1997's storage is unknown, but it seems rather normal.

As I'm drinking two teas in parallel (once only, I drank these serially on the other two tasting occasions), I'll just go through some steps and mention what I thought about both of these teas in that stages.

Wet leaves:
96: Dry rare wood (sandalwood?) and red berries - quite light and unusual.
97: A generic agedness, slight plumminess (in "main smell", not in the aftersmell, i.e., it should manifest in taste, but not necessarily in the fresh plums aftertaste).

The color of the liquor was more or less the same in the first brew, but the 1997 version was noticeably darker in further brews: 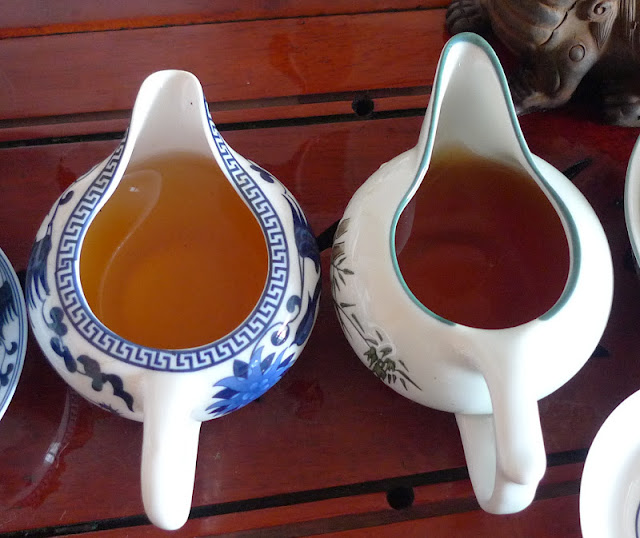 1st brew:
96: Molasse sweetness, slight weirdness coming from dry storage - it's like red berries, but there is something not really natural about it. It is not particularly in harmony, I think. But it is interesting. On the first tasting, with a teachum Michal, we agreed that once one decides he likes it, it's not bad. However, I can imagine that someone would not enjoy this style of tea. Actually, when I made it on the tasting I'm writing about right now, I found it almost nasty, compared to the mellow 97 version.

97: This gives a reasonable calm agedness. In a couple of first brews, the earthiness is almost like  clay which I do not enjoy really. The mouthfeel is more obvious than in 96. This holds true for the rest of the session and it suggests that the claim that dry stored tea is more intense in mouth does not have to be true (according to my experience, it is definitely not true when said this generally).

2st brew:
96: There is a very slight agedness but only at the beginning. The taste is gentle, sweet, slightly sour-ish with a bit of sandalwood in the aftertaste.

97: Full, surprisingly aged, given it's just a 1997's tea (no shicang present!) and plummy in taste. It tastes really pretty good, especially given the relative youth. It feels nice on the tongue and performs long and well on the tongue. Now, it is distinctly heavier and more robust than the 1996 version, although hardly as specific and unusual.

3rd brew:
96: Camphor appears, red berries tend to hide, therefore we get a slight agedness with slight  influence of sandalwood and camphor. Note that everything is "slight: - there is no clear dominant aspect of the taste. It is too light to me. One could say "just prolong the steeping" - but if I did that, the sourness and bitterness would overpower the rest of the tea. At this stage of brewing, this tea is "keep me light or leave me be."

97: Well balanced and good. In the aftertaste, fresh plums I like so much make a guest appearance. However, I must say that this fresh plumminess is more pronounced in the grotesquely stored 98 from puershop. Or in the 90s Red Mark from thechineseteashop.

4th brew:
96: Still inoffensive and light. The red berries make a comeback and the sweetness is stronger than in the previous brew.

97: Similar to the last brew, nothing really new. The storage was rather good I think - the tea may lack some depth of older teas, but it is clean, yet it feels aged and balanced.

5th brew:
96: As the bitterness is not a threat anymore in this stage of the session, the longer steeping helps. The tea is still light, but quite intense (like the Burgundy lemonad...err...wine) - red berries go together with the slight sourness. It's not a taste for me, but I would say it is a feature rather than a bug.

6th brew:
96 - Reasonable again - strange, unusual, but only because something is not an usually aged tea, I won't shout it's rubbish. But I'm not used to this dry stored tea. The sweetness is interesting here (and to an extent in other brews too) - sometimes it feels slightly burnt - one has to decide whether he feels it more like a sweetness or more like a burntness (strange, I agree).

97 - It follows the way sketched in the previous brews but gets cleaner and cleaner - in the first 2 or 3 brews, there was the weird clay taste and some sort of cloudiness. From the 5th brew or so, it gets close to a really good tea. 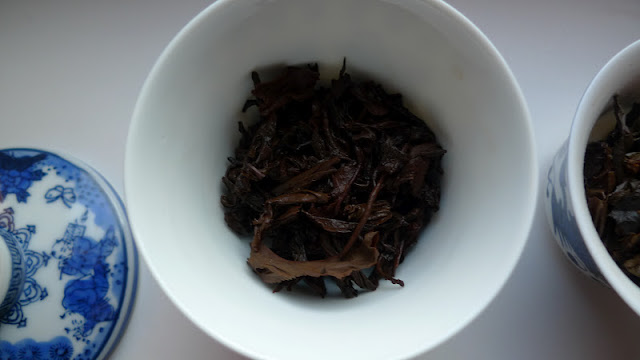 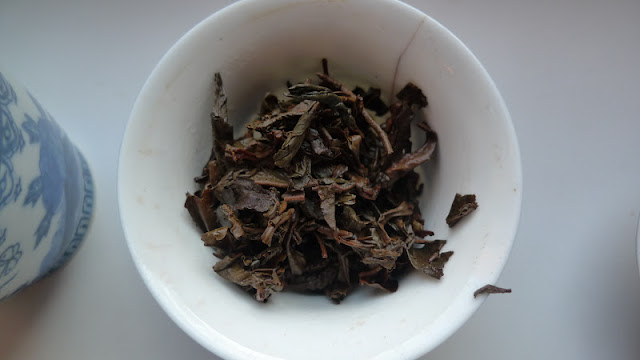 The teas next to each other: 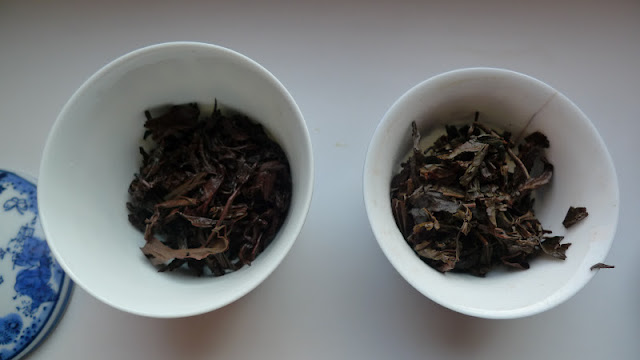 Overall, I was not impressed by any of these two teas, but the 97 was a good, clean, normal "somewhat aged" tea, at least. The 96 was too strange for my tastes. It is not bad I guess, just more dry than I'd enjoy. And I'm afraid that it might be beyond redemption by a period of more normal storage.

What I did not really like was the lack of more pronounced mouthfeel in both of these (the 97 was a bit better) and the lack of stronger fresh plums in the aftertaste - the 97 had it sometimes, but not as strong as I'd enjoy.

For example, the 90's Red Mark is notably better in both of this aspects, which, when combined with the huge price difference, makes it obvious that I won't be needing these 7542s anytime soon.
Vystavil Jakub Tomek v 12:30