When ordering a box of goodies from Wistaria, I've been gifted a pouch of 2007 Red Label as well - thanks a lot! In my tester sessions, the tea did not come up as impressive, but when done "normally" (6-8g in a teapot), it was actually very good - here it goes: 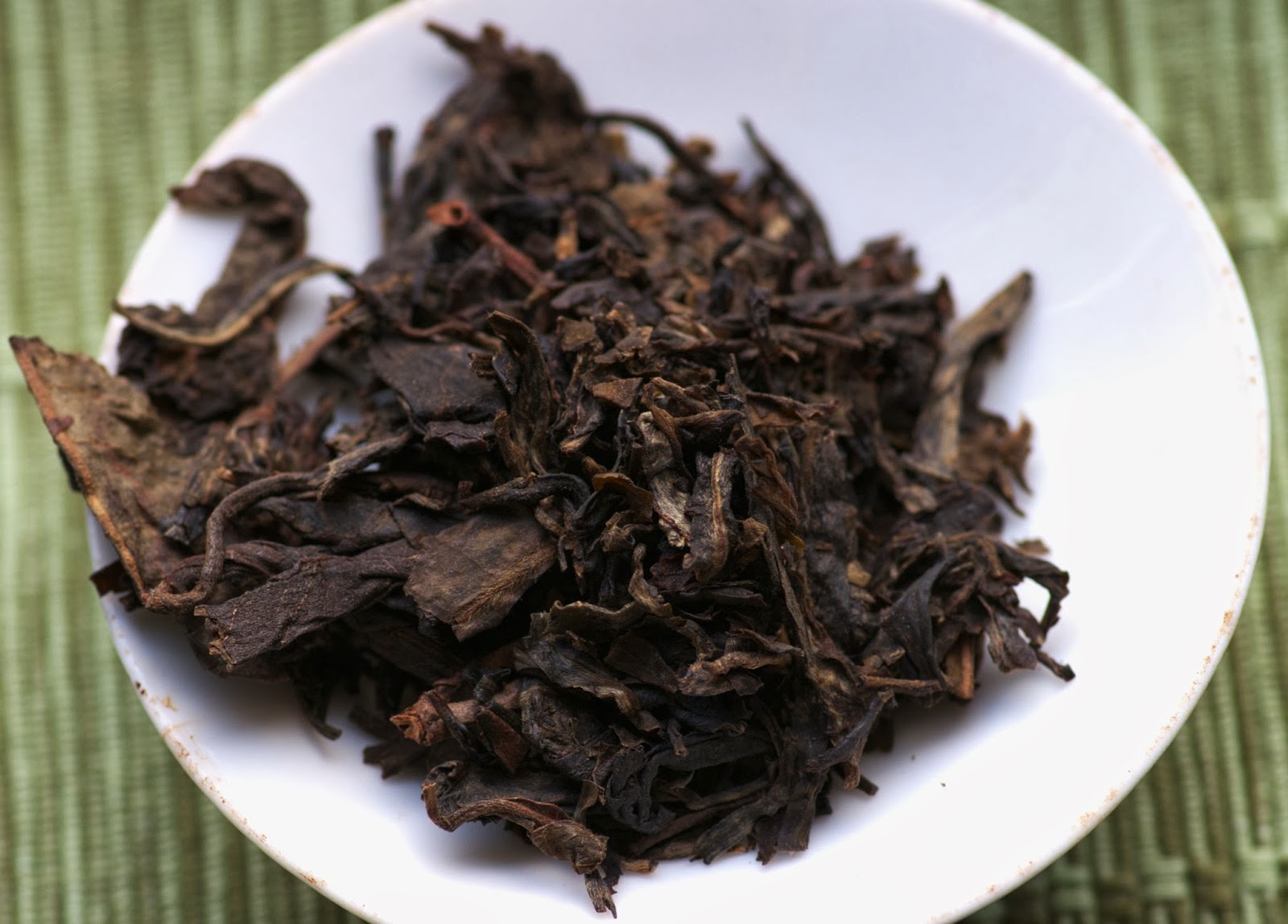 The leaves were actually a bit more wholesome; a) I got only a sample, b) this is the very last of it, both of which leads to increased occurrence of leaf fractures.

Right after rinsing, the leaves tell you "this is going to be good". The "Wistaria scent" is actually quite faint and the aroma is nicely sweet, strong and spicy (maybe mushrooms as well...).

The tea is quite rich in saponins, as you can see below: 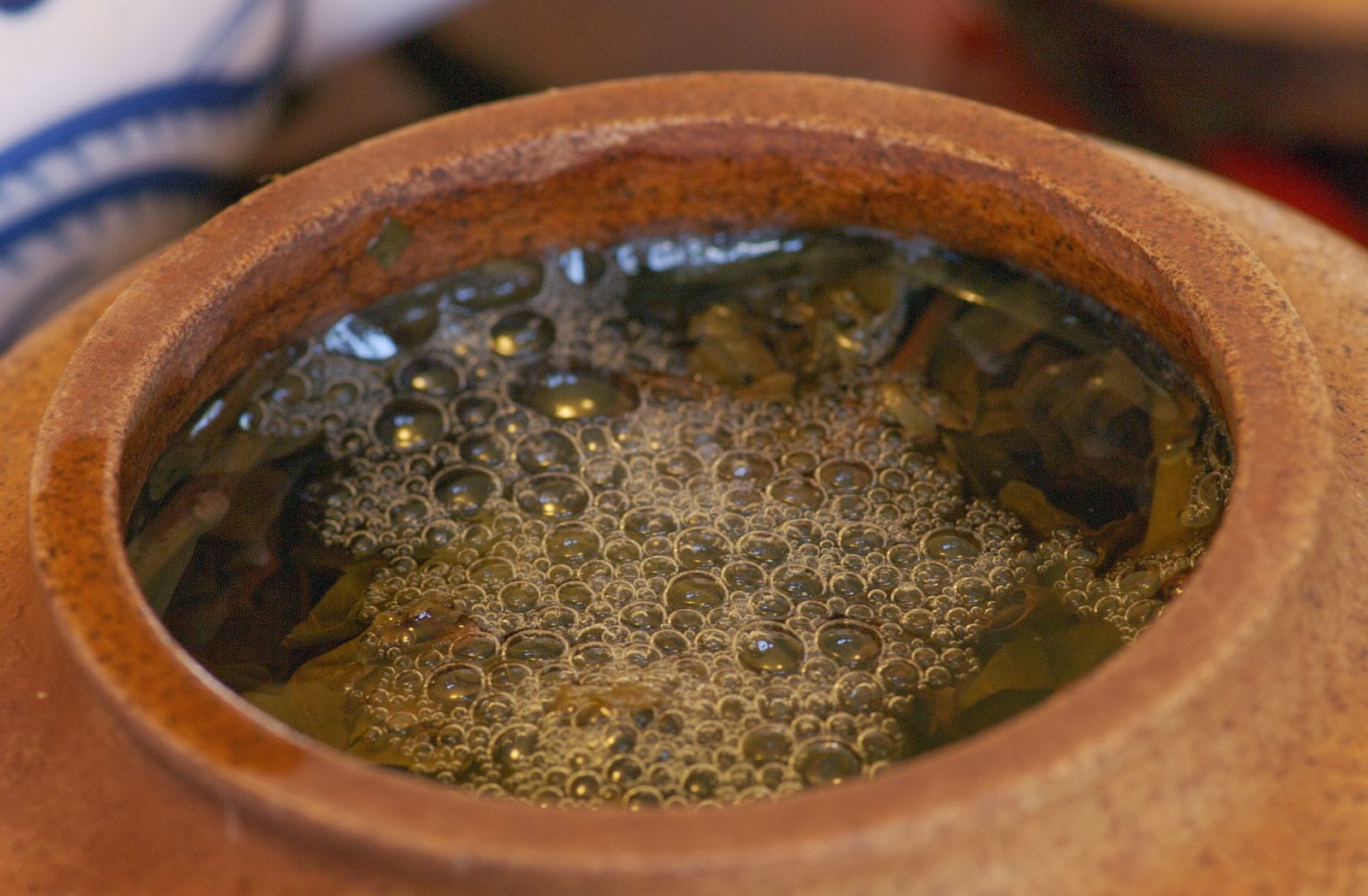 And the liquor has the color of amber. Its clarity is also not too far from that. Simply put - it looks very nice. 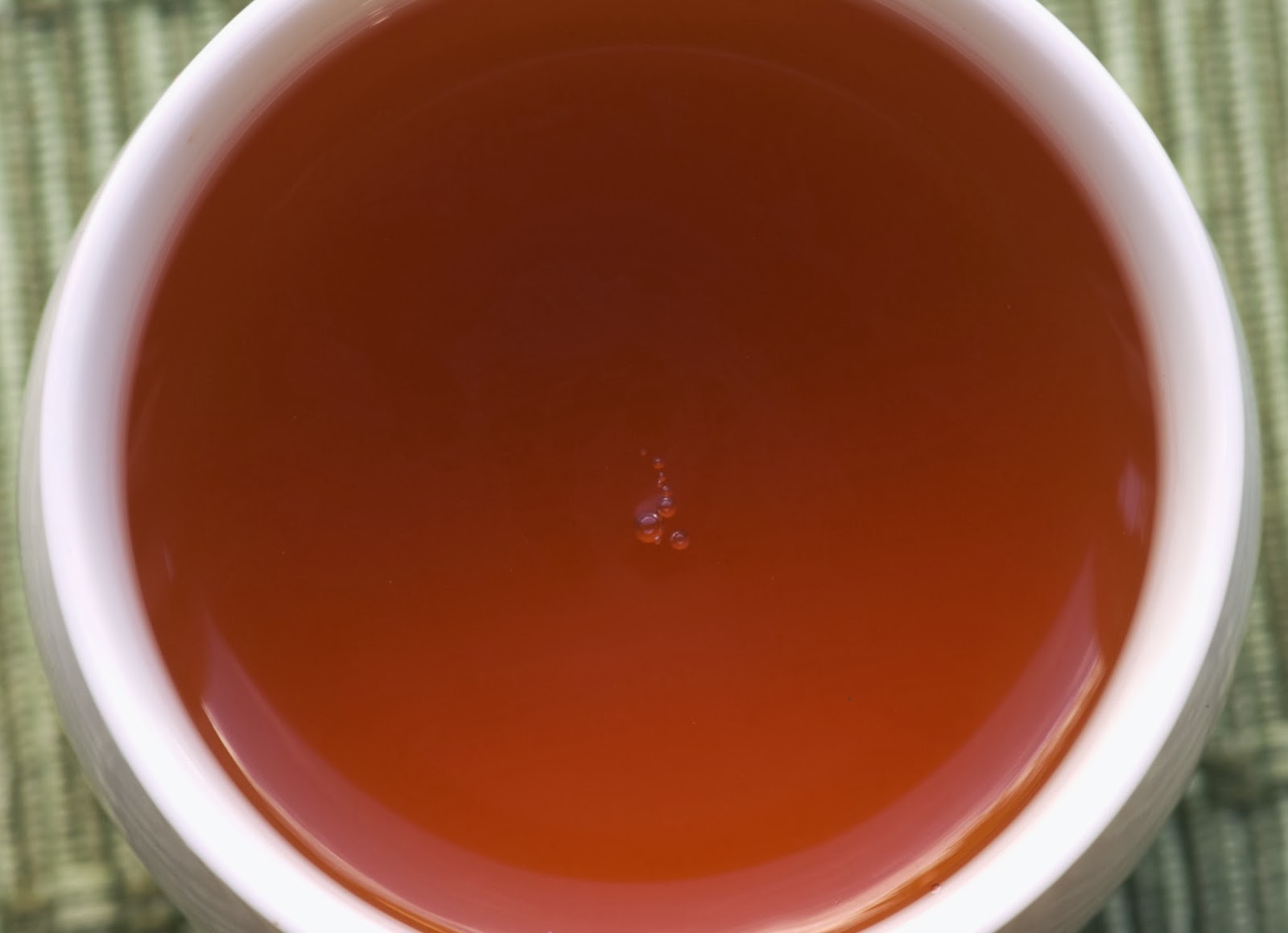 The liquor not only looks pretty, but smells pretty as well! I smell honey, overripe fruit, some clay after rain - very pleasant and harmonic.

Good things happening in the nose get even better in mouth. One thing I could not help thinking was, how coherent this tea was - it has got a single powerful and wide character (if I were a taste-synesthesiac, I'd have called it "brown"). It shares some features (roundness, majestic-ness) with much more aged teas. I'd say the taste spectrum consists of sweet clays, overripe fruit, exotic wood and honey, the clay being strongest in the first steeping, then gradually giving way to the rest. It all works very well together. The Red Label feels quite "sunny", in a way, just darker via aging... The overall pleasantness is accented by a lack of any significant bitterness and astringency.

The aftertaste is long and very nice (I did not find it unlike to 7542 actually).

While I did not feel any particular activity in mouth, I felt a good deal of "qi" in the tea. Drinking it was a most soothing and "to-world-connecting" experience.

Overall, I really like this Red Label - it is very positive, deep, sweet, harmonic and all that. In a tester, I actually preferred the Blue Mark (which is quite a bit cheaper as well), but after having them in a "full session", I quite prefer the red one...

It probably isn't cheap now (I guess it could be between $140 and $170), but that's life I'm afraid. Its qualities are undoubtable nevertheless.
Vystavil Jakub Tomek v 23:33 6 komentářů:

Many thanks to Nada for sending me this tasting set: a set of two similar teas, one of which does not contain pesticides and the other does - what better could exist for isolating the feeling/taste of pesticides? Theoretically...

Both the teas have the broad "house style" of young EoT teas - large, pretty and furry leaves with a sharp green aroma.

Rinsing causes leaves to open and release the smell that could be described as an ashtray (especially shortly after rinsing), chestnuts and eventually sweet leather. It is distinctly green, sour-sweet and hardly pleasant to me (some people do like this style of tea though).

Aroma of liquor is surprisingly weak in both teas and not very pleasant.

The nonpesticide tea has slightly cloudier and darker liquor. A sidenote - both teas acquire a rather peculiar grey tint after a while - it looks quite zombie-like and surely not too nice.

How does the nonpesticide tea taste? I unfortunately find it quite disgusting - it seems to be some sort of young brutal Bulang - there's taste of ashtray, chestnuts and generic sourness - without any decent body or sweetness. As a bonus, there is an awful dry and super-persistent bitterness (worse than in normal Laoman'e) at the end of the taste. Actually, this one does taste quite poisonous even without pesticides. On both occasion, I failed to consume more than one large cup of this thing.

The pesticide tea seems slightly younger, is a bit sweeter and maybe more fruity (with a strange soapiness), but also not good. Even though the evil bitterness of its pesticide-free comrade is absent, there is a singularly peculiar astringency and "furry" feeling around teeth, which, I believe, are the features brought to tea by pesticides.

Neither tea is a normal puerh in my opinion - it's like a bad crossover between pu and green tea maybe? Also, it is quite interesting how horrible can such beautifully looking tea be.

However, this tasting set is not about tea itself, but about comparing pesticides to nonpesticides. It rather succeeds in this aim and I think that such a venture is generally very commendable. I have two admonitions concerning the set. First, even the pesticide-free tea tastes very evil and I think that some features could be very well considered unnatural. Second, repeated sessions for reinforcement of your judgement on what are pesticides like are quite difficult to do, because your body will need considerable time to regenerate after the previous one.

Btw. I'm looking for somebody to pass this set to as it is undoubtedly educational, but once you're done with it, there is little point in continuing its consumption. If you chance to come to Oxford and want to have this, drop me a line and we can arrange it.
Vystavil Jakub Tomek v 20:50 1 komentář:

Hello again, dear readers. Due to the fact that we generally need to stay in the place of my studies for most of the day, my tea sessions sort of moved there - which means less time for photos and writing, for which I'm sorry. However, that's just how things are. Besides, I don't have so many new teas these days, so there is not so much to write about. 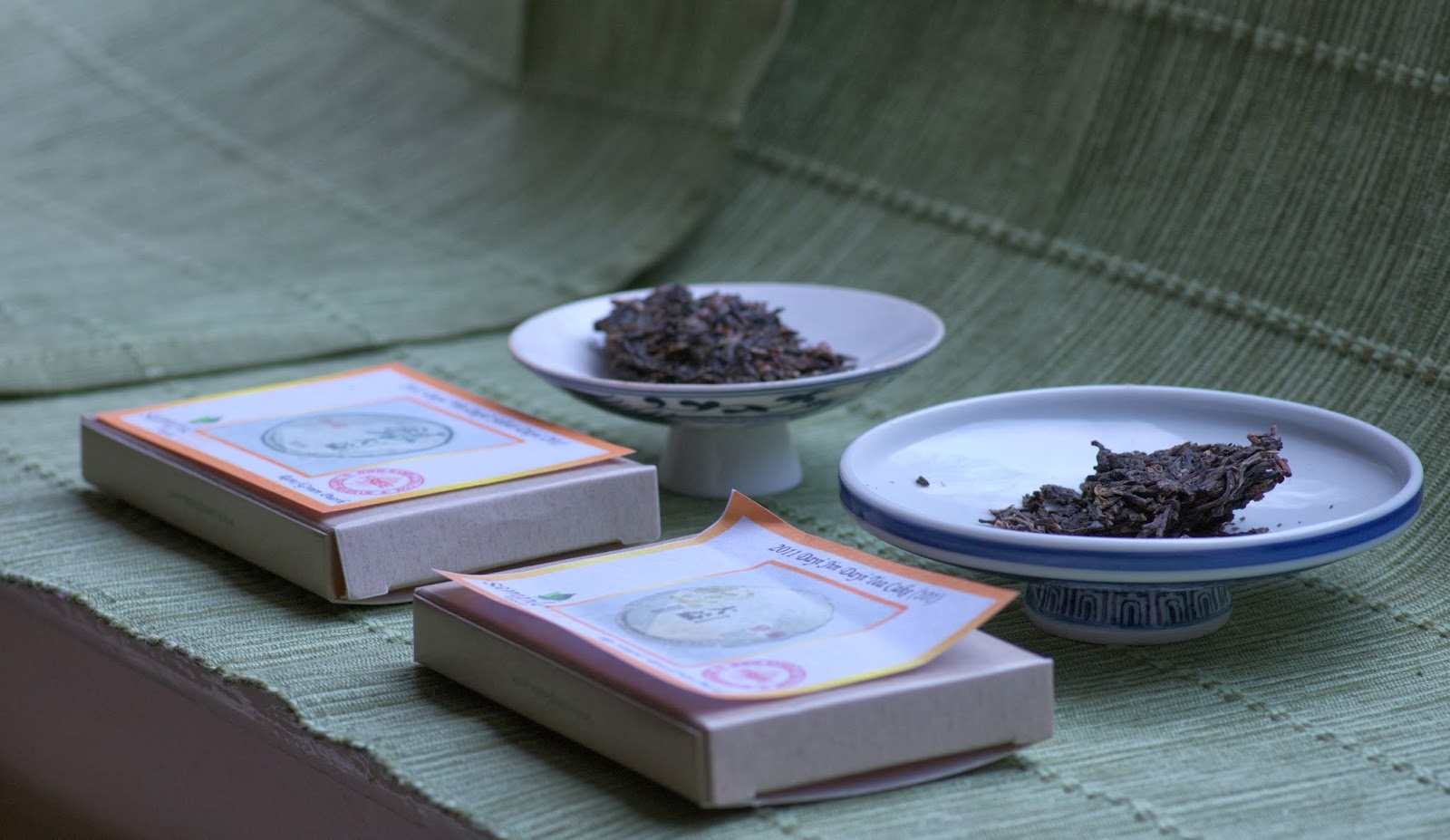 Before we descend (or ascend?) to the two teas of today's afternoon, let me share a story with you. Beware of Mexican accent! Not only that stories by two lovely Mexicans studying with us make you believe that Mexicans eat dogs (killing them by breaking their neck/spinning them around, holding the dog's neck!) until it becomes obvious that "dogs" are actually "ducks" - all ten or so people believed the dog version for a considerable while! Today, the Mexican pronunciation striked again - when I gave cups of tea (2013 Dayi Snake cake) to fellow people in the place where we study, the reaction by one (a Mexican friend of ours) was "ah, this tea is junk". One is not used to such a forthright reactions in the UK, especially not towards what is basically a gift and definitely not a bad tea. However, all ended well, when I realized the small peculiarity of Mexican pronunciation, that "y" is pronounced more like "j/g" (i.e., something like "dzh") and "junk" was actually "young". Young it is indeed.

2011 Jin Dayi
This is the "gold" Dayi cake. It may be the same price after a couple of years. Originally costing about $35 per cake, only 10g cost $5 at Sampletea now (and I think they generally are quite reasonable in pricing). 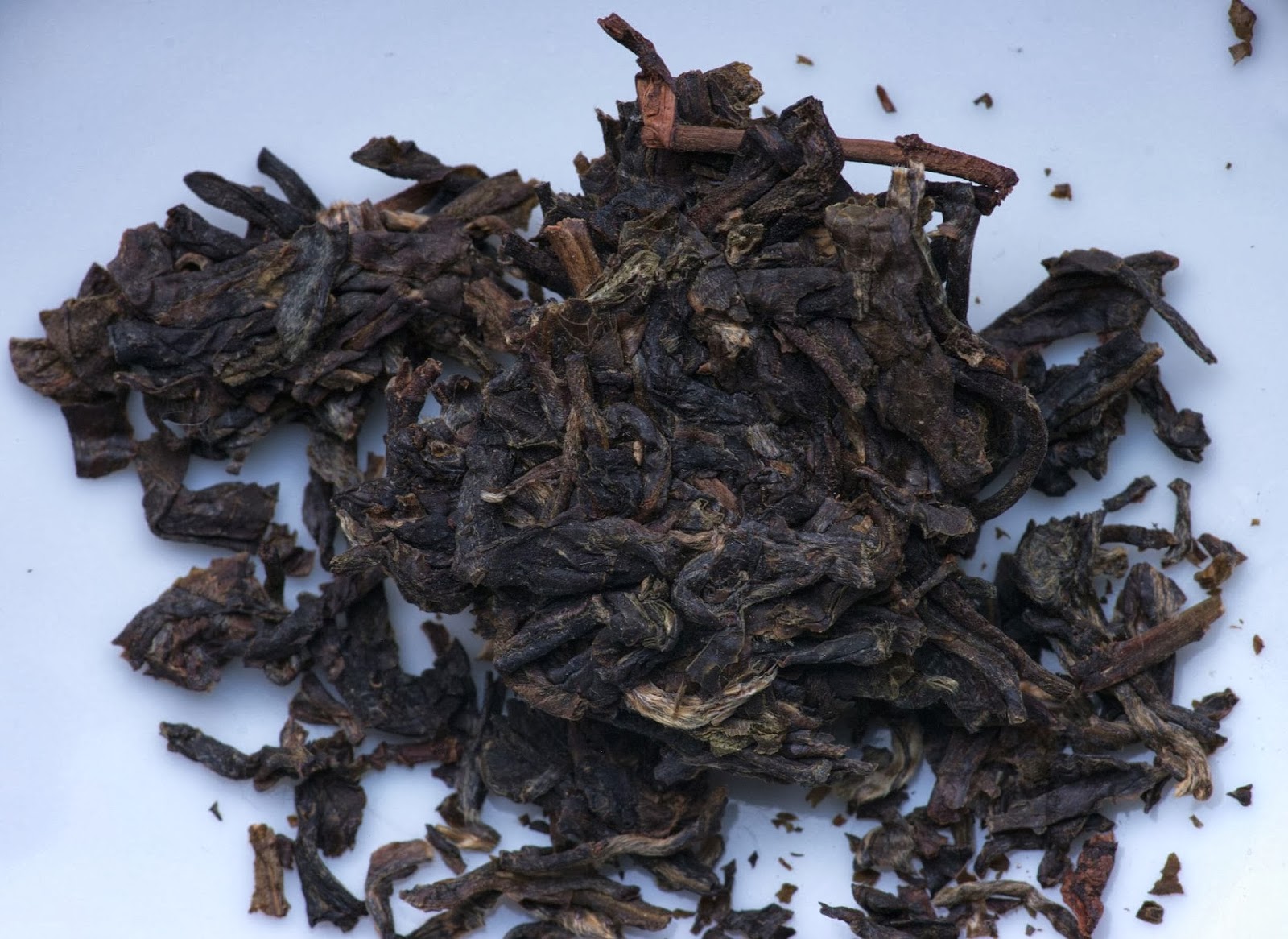 The leaves, even after rinsing, provide quite a hard experience to be honest. It smells of dry forest ground, with some mushrooms. It is basically like a rather ordinary young sheng, except it is stronger than most and free of any "light" features, such as sweetness, fruitiness, or things like that. 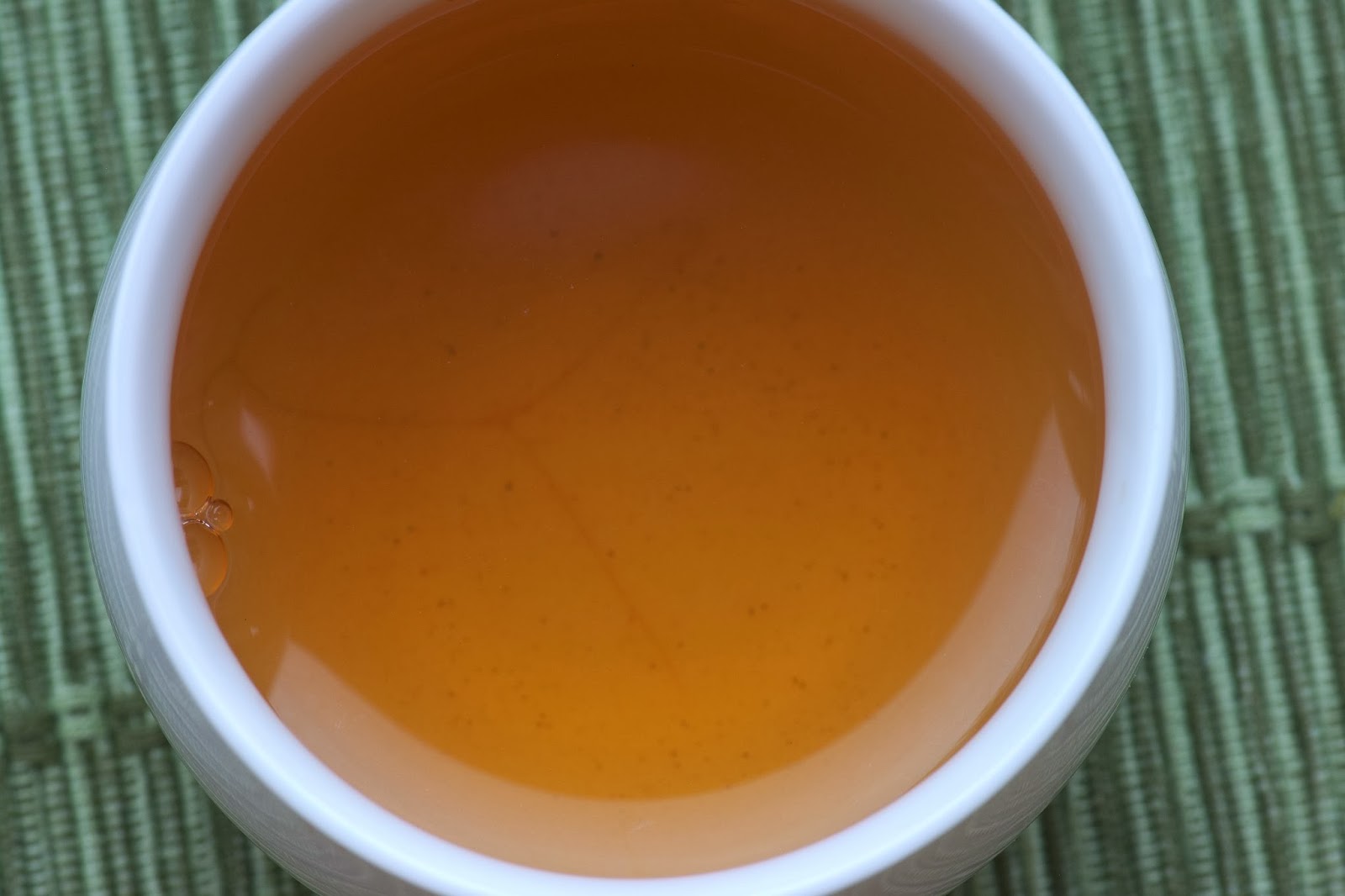 The liquor has a pleasant color and clarity.

The taste is essentially somewhat ordinary, but strong - woody-clay-like (with a bit of smokiness in the first few infusions). It bears a remote resemblance to aged teas, but without their depth and elegance. It is also quite bitter and very astringent. On a more positive note, the taste does taste rather long and is full-bodied, which sets this cake apart from similarly hard teas, which, on the top, are thin and plainly bad.

Also, the tea built up a decent mouthfeel with good cooling and by the fourth-fifth steeping, it kind of ameliorated my initial "no way" opinion. Still, I did not feel particularly well/comfortable after drinking it.

I believe that the Jin Dayi is a reasonably good tea, which is just totally not going with the fashion of making young teas easily drinkable. But it certainly has enough strength to get somewhere via aging and  I suspect that the result will be pleasant. Nevertheless, the price, I'm afraid, escaped from some sort of mental home... 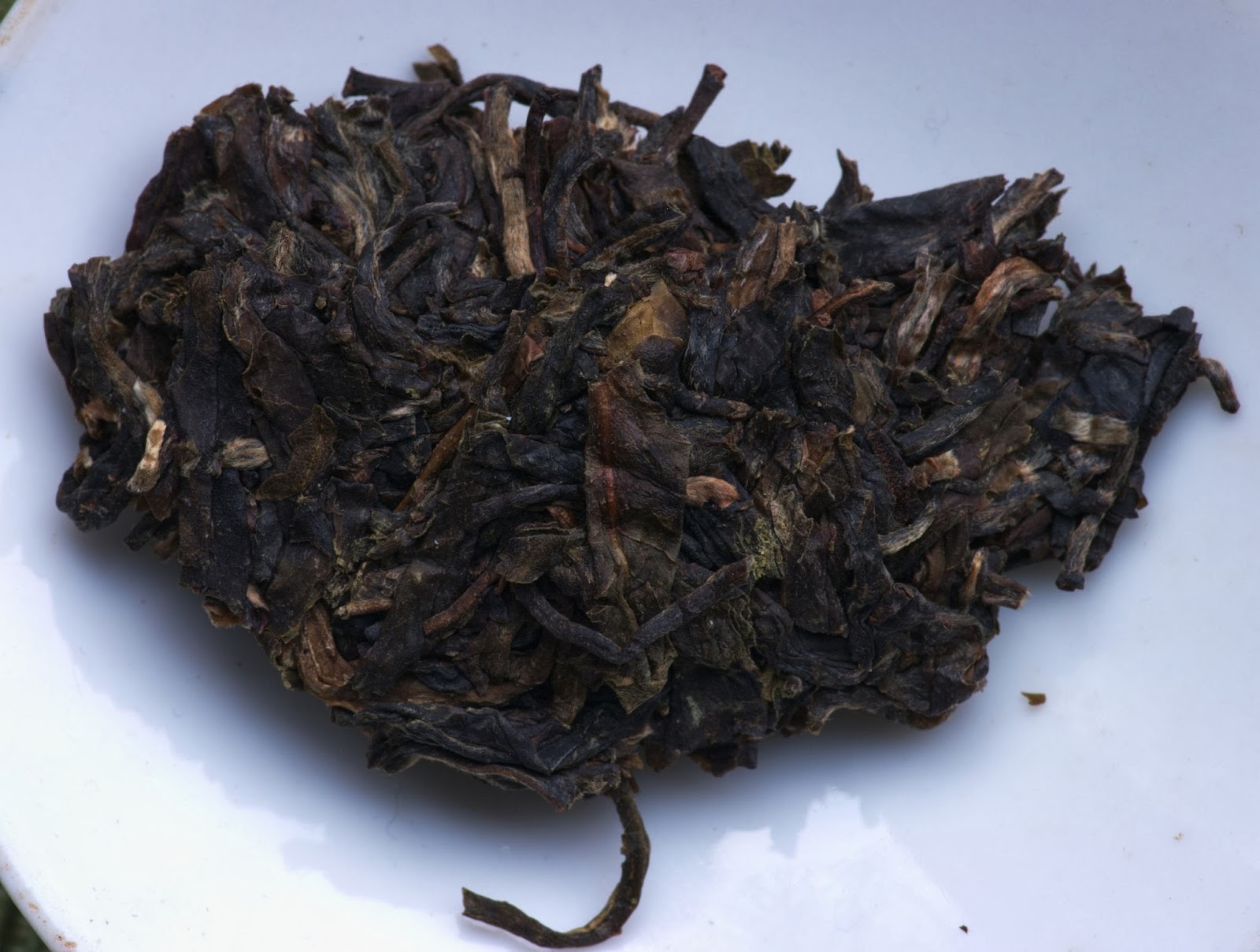 This "silver" tea smells much more pleasant and approachable than the "gold", when rinsed. It is very sweet and smells of dark fruit and magnolia.

The taste follows the aroma - it is really unusually sweet (even for this cluster of teas), sugary and full-bodied. It does not have a whole lot of other to tell, except faint dark floweriness (might it be Luoshuidong?).

Despite the lack of particular "tastiness", the fullness of body and overall pleasant and calming feeling is very nicely combined with powerful cooling and vibrations in mouth.  This tea feels very positive and soothing (completely unlike the previous tea which attempted to murder me), which is imho a good thing. Whether it does have enough strength to age is another question, but I'm inclined to believe that Dayi people know what they're doing.

Despite this tea's youth, I actually enjoyed drinking it. It is quite a "fancy" thing, in a way of today's single-area expensive cakes. At the same time, I guess the price can be something around $60, which is not too bad...

I.e., today, I believe the saying "Talking is silver, silence is gold" was bolstered. Still, I guess there is a bit of Dayi inflation in the naming (iron and copper might be more suitable). Or, it might be that when the need to have even fancier blends comes, we may yet see mithril, adamantium, or even daedric cakes? The time will tell.
Vystavil Jakub Tomek v 23:29 3 komentáře: