To start this tea note, let us note that maocha for this tea has been picked in 2006, so this tea might be considered to be a 2006 tea instead. However, it is declared as 2009, so I will stick to that.
I tasted this tea in 2009 and was not immediately impressed. It was nicely rounded, a bit bitter and a bit strange. Now, I suspect that travelling has not done this tea too well. Now, after sitting and resting for two years, the experience is different. It is not too different, however the difference makes it, in my opinion, a very interesting tea.
Dry leaves: 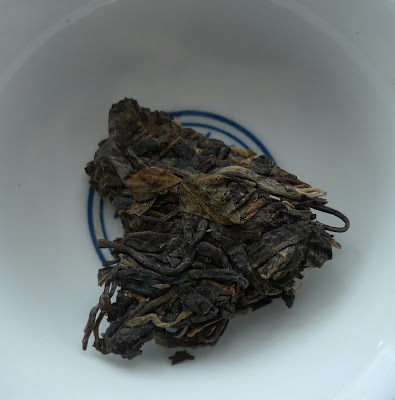 Leaves are dark (at least for 2009 or maybe even 2006 tea) and smell a bit earthy, but it is nothing surprising considering the tea has been stored in loose form in Banna. However, I consider this processing to be a feature, not a bug.
Most of my brews looked like this: 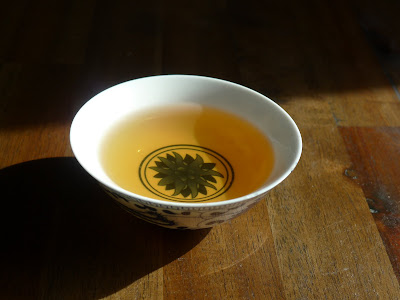 The tea is very consistent across brews:  sweet (in a dark way, if sweetness may be dark/light), earthy (but in a light way, not like mold or shu puerh) and aromatic. The earthiness may not be enjoyed by everyone, but I enjoyed it this time. There is a certain bitterness which does not go away, but it is not powerful enough to be noticeably unpleasant. Aftertaste is good, undisturbing. Hui gan is weak, but I did not feel it as a problem in this tea.

Felt a bit like it felt to be outside here: 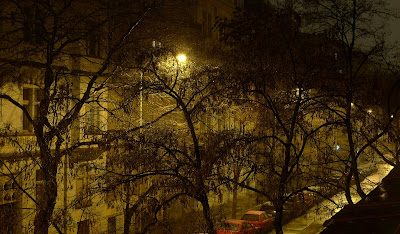 Cha qi felt strong to me, which I did not expect. It brought melancholic memories and let me be in them again. It made them pleasant though, even though they may have been sad.
In its character, it is sort of similar to 2001 Yi Wu Bao Pu Xuan, which is slightly more interesting and complex in taste (but lacking in energy for me). The similarity is probably a consequence of similar technology of processing.
I believe that the tea does not have much from its original character, but it is interestingly processed. And it still develops. Two years ago, it was a bit boring (again, it may have been the travelling), now it is stronger and clearer in taste. I'm interested in where it will develop in future years.
Further reading: http://half-dipper.blogspot.com/2009/09/2009-yunzhiyuanruicaoxiang.html


24/1/2010
Actually, the tea develops better than one would expect. The sweetness is more pronounced, the "storage smell" disappeared. Still a bit rough finish, but it looks promising...
Vystavil Jakub Tomek v 21:37